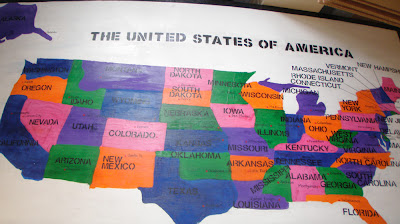 The students learned how to grid out a picture of the United States and then used the same proportions to grid out the piece of plywood that the mural was painted on. Then the students drew what they saw in the photo in the corresponding box on the mural. Finally, it was painted and the state names and capitals were added.

"I couldn't be more proud of the hard work that the students put into the creation of this mural," said Ms. Trudgeon.

Posted by Baltimore Curriculum Project at 6:27 AM