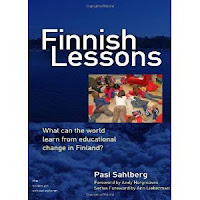 Pasi Sahlberg is perfectly placed to tell the story of Finland’s “education miracle”. He has been a teacher, an administrator, an education policy maker and an academic researcher. He is currently the Director General of CIMO (Center for Educational Mobility and Cooperation) at the Finnish Ministry of Education and Culture. His new book Finnish Lessons, tells the story of educational reform and change in Finland over the past fifty years and as he tells the story, it becomes less miraculous and more obviously the outline of a purposeful, thoughtful and coherent strategy for school improvement.

“Education in Finland is seen as a public good and therefore has a strong nation-building function” (p. 39) is how Sahlberg sets the scene and this notion of a national commitment to education as part of a coherent vision for national development as a whole is what sets Finland apart. Sahlberg is well aware that Finland’s education system is both specific to that nation and capable of serving as a model for other nations in search of “reform”. Sahlberg is well aware that those who disdain Finland as a potential model for the United States focus on Finland’s small size (six million people), and its supposedly homogenous population. While these concerns are taken seriously, Sahlberg manages to dismantle such criticisms.

In his lucid introduction, Sahlberg refers to the “tough solutions” favored in countries such as the United States, England and France. “Tightening control over schools, stronger accountability for student performance, firing bad teachers, and closing down troubled schools are part of the recipe to fix failing education systems.” (p.4) We are reminded that “there is another way to improve”, which means “improving the teaching force, limiting student testing to a necessary minimum, placing responsibility and trust before accountability and handing over school and district level leadership to education professionals.”

Sahlberg provides his readers with a helpful chart (p.103) in which he divides “GERM” (Global Education Reform Movements”) from the “Finnish Way”. In the GERM column, there is an emphasis on punitive strategies, “market-driven” solutions; prescriptive curriculum and high stakes standardized testing. We are familiar, of course, here in the United States, with this kind of “reform”, change without change, movement without progress. In this kind of prescription, teachers become villains, students are laboratory subjects, unions are negative agents and test scores are the evidence of improvement. More and more privatization of the system creeps in, private entrepreneurs bereft of genuine educational experience or philosophies are regarded as instant experts and given greater and greater control of new formats and schools. Increasingly teachers are to be evaluated not by their expertise in method, curriculum and teaching strategies but by raw test scores, without regard to context. Underlying all this “reform” is a refusal to grapple seriously with poverty and its root causes.

Finland sees the pathways quite differently. There are national goals but local and regional ways of meeting these objectives. Teachers are highly trained first in content areas and then, only after achieving a B.A., in teaching methods and philosophy. Teaching is a professional career, with training and national status to match. The curriculum is both broad and deep, structured to give students a foundation on which they will build later choices. There are options after the nine-year mandatory educational period, including vocational training rather than traditional college paths. Resources are targeted with emphasis on those schools and areas where high need is evident. Education is nationally funded, not by the archaic method of local taxation which is used in the United States to the detriment of high poverty areas.

Sahlberg makes it clear that the educational programs and policies of Finland are woven into the national policies of other aspects of the culture. For example, the national commitment of Finland is to equal opportunity throughout, access to a wide range of services and institutions. This is the “welfare state” so often decried in the United States but which forms the philosophical and practical backbone of the body politic. The success of the education system is part of a whole: medical care for the nation, employment strategies on a national level, social and political objectives that receive widespread support rather than political undermining as an election ploy every two or four years.

Finland is small and that’s why it works? Finland is the same size of a large number of American states (Minnesota is one example) and so on a state basis, such a system can work. Is the Finnish success due to homogeneity? Finland is not Canada or the United States in terms of the widespread multi-cultural nature of the society but it is hardly homogenous. Increasing numbers of immigrants have settled over the past forty years, including migrants from the old Soviet system. There are many special needs children and while the poverty rate is less than 5% overall, compared to 22% in the U.S., Finland is hardly a state without historical and current issues to address.

The most important chapter of this highly readable book is chapter five “Is the Future Finnish?” Here Sahlberg makes clear that he believes the GERM strategies are misguided and even harmful to their stated objectives because they are “characterized by increased competition and choice, standardization of teaching and learning, tightening test-based accountability and merit-based pay for teachers” which may actually “jeopardize schools’ efforts to teach for the evolving knowledge society and for a sustainable future”.

Finland has relied on four strategic principles since the 1970’s. These are:

“Guarantee equal opportunities to good public education for all
Strengthen professionalism of and trust in teachers
Steer educational change through enriched information about the process of schooling and smart assessment policies
Facilitate network based school improvement collaboration between schools and non-governmental associations and groups.”

Add a fifth component of school improvement to this list: a strong, functioning national anti-poverty program that reduces the impact of poverty on educational attainments.

The continued insistence in the United States on blaming teachers for the flaws in the system, increasing the evaluative percentage of test scores in assessing teacher competence and ignoring the need for a national anti-poverty program defies rationality. Setting one state against another in “Race To The Top” contests and relying on amateur organizations like Teach For America when what we need is greater professionalism and training would strike many foreign educators as a willful dismissal of what research tells us would really work. There is one area, however, where both the United States and Finland have common ground and that is in the importance they both place in school leadership. Finding the right kinds of people with the right skills and leadership qualities is high on the list of what makes for good schools and good systems. The American enthusiasm for importing leaders from the corporate world is not shared by the Finns; nor is the view that one can teach for a couple of years then move into administration successfully. It also seems apparent that the Finns want their school principals to be central to decision-making on educational policy, something not in much evidence in other countries. The Finns would certainly agree with recent efforts in the U.S. to study the research on school leadership and train leaders accordingly.

Finnish Lessons provides other indicators and reasons for school success that perhaps are more difficult to transpose to other systems and nations. For example, Sahlberg mentions the early reading successes for students and claims that to some extent this is based on the widespread reading habits of Finnish adults along with subtitled programs in movie theaters and on television. He also alludes to the national focus on building schools that reflect learning environment needs, something we have not done very much in North America. In the end, however, what we can learn from Finnish Lessons is both cultural and political: we can also pick up clues from other successful systems, such as those in Hong Kong, South Korea, Singapore, Canada and Australia, all of which teach that a strong educational system begins with investment of time, thoughtfulness and funds, that our education system here should lean much more heavily on educators’ expertise and much less on political factions and political posturing. While it is certainly true that we should not merely imitate successful national systems, it seems also true that our insistence on trying the same old things and expecting different results fits perfectly with Einstein’s definition of insanity.

Posted by Baltimore Curriculum Project at 6:43 AM