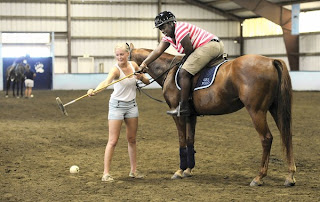 Sabriaya Shipley enrolled in a summer learning program that her mother promised would offer new experiences. But when the 15-year-old city girl discovered those experiences would be on horseback at a school in Baltimore County, she balked, at least a bit.

"At first I said, 'No way,'" said Sabriaya, a rising sophomore at the Institute of Notre Dame in Baltimore. "I never thought I would even get on a horse, let alone lead one around the ring. Now I am trotting on one. Now I can say I play polo."

She can even deftly tie a horse's tail into the regulation polo knot. "It is kind of like braiding hair," she said, demonstrating her newly acquired skill on a docile mare stabled at Garrison Forest School.

The all-girls private school in Owings Mills is sharing its rich equestrian history with a dozen students from East Baltimore neighborhoods. Riding is only one of the classes the school is offering its city guests, who are participating in the Middle Grades Partnership, a public and private school collaboration sponsored by the Baltimore Community Foundation, a philanthropic organization dedicated to improving the quality of life throughout the region.

The Middle Grades Partnership provides summer and after-school learning opportunities to academically promising middle school students in the city, according to its web site. It began five years ago to give students "experiences they would not otherwise have, introduces them to a broader world and lets them explore new interests," said Andrea Perry, dean of special programs at Garrison Forest.

A bus brings the students from City Springs and Collington Square middle schools in the city to the campus in Greenspring Valley. They take riding lessons in the morning and then pursue academics, rotating through classes in math, language arts or, maybe, French.

Cindy Halle, Garrison Forest's riding instructor and polo coach, added horsemanship into the enrichment courses and launched "Introduction to Horses, Riding and Polo" last month. The U.S. Polo Association kicked in a $7,000 grant that helped pay for the students' helmets and riding boots.

"It's a pilot program where riding lessons evolve into polo," Halle said. "We are already teaching all sorts of sports and life skills, but when you put an animal into the mix, especially a horse, it's empowering."

The first day of the four-week course was filled with the jitters typical of inexperienced riders. When the program ended last week, the timidity had vanished. Those same girls were helping to lead the large animals from barn to riding ring.

"These girls were scared at first," Halle said. "Now they are all pretty damn comfortable."

Sabriaya was comfortable enough on horseback to trot around the ring and chat a little with a fellow rider and confident enough to wave to spectators cheering her on with, "You look good up there."

The novice equestrians have learned to trot, canter and form a straight line on horseback. They may not be ready for a fast-paced game of polo, but most can apply mallet to ball toward goal, while holding onto the reins. These riders have also learned a few lessons from their horses, Halle said.

"I learned right away how to get on," said Asia Jackson, 13, who will attend Baltimore City College in the fall. "Now I know how to move the horse in the direction that I want to go."

Posted by Baltimore Curriculum Project at 9:03 AM

USA Football has awarded the Baltimore Curriculum Project a youth football equipment grant of $1,000 to support the football program at City Springs School. USA Football Equipment Grants provide youth leagues and elementary, middle and high school programs from across the United States with over $1,000,000 worth of new football equipment.

We would like to thank USA Football for their support. For more information visit: http://usafootball.com
Posted by Baltimore Curriculum Project at 1:03 PM

The United States Tennis Association (USTA)/Mid-Atlantic has awarded the Baltimore Curriculum Project a Diversity & Inclusion Signature Program Grant of $1,125. The grant will help BCP bring tennis to over 800 mostly African-American and Hispanic-American students from low-income families in East Baltimore.

USTA/Mid-Atlantic is a not-for-profit organization committed to promoting tennis by offering quality recreational and competitive programs for people of all ages and abilities. The USTA Diversity and Inclusion Committee was formed by the USTA to increase minority participation-particularly in the African-American, Asian, Latino, Hispanic, and Native American communities.

We would like to thank USTA/Mid-Atlantic for supporting our schools. In June USTA hosted a tennis event at Hampstead Hill Academy to introduce over 400 elementary and middle grades students to "10 and Under Tennis."