The community recently opened a football field, but school wants place for kids to play 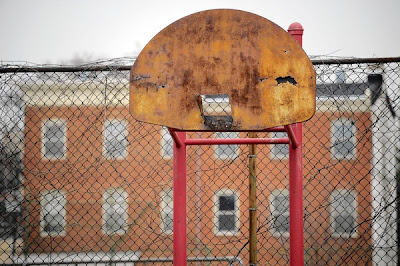 Most mornings, students arrive early at City Springs Elementary/Middle School to throw a football around on the blacktop. They love the game, but it is hard to play in the raggedy yard behind the school.

The students of the school had a plan back in 2007. A group wrote a letter and gathered signatures, then handed it to the principal at a morning assembly.

"The complex outside has many things wrong with it," they wrote. "It is outlined with a very uneven grass, it has broken glass on the rocky concrete, a broken gate, a swing set without swings, a basketball court with only one goal and it is very trashy. This needs to be fixed because many children hurt themselves on the complex. … We can have a football field, basketball court, a swing set and a gate to keep intruders [out]."

The principal listened and so did the adults in the community. From the students' vision has come a new regulation-size football field dedicated recently that will serve as a place for sports teams in the neighborhood. Built with a $100,000 grant from the NFL to Living Classrooms Foundation and $135,000 from the city's Department of Recreation and Parks, the field also was supported by the Ravens.

But the football field was built a block away from City Springs because the school grounds were not large enough to accommodate a 100-yard playing field. And because the field is fenced, the students don't have access to it every morning.

Six schools, including a high school, Freedom Academy, are nearby and have teams that need a field. City Springs has an intramural flag football team, as well as a soccer and basketball team for its middle-schoolers.

"I feel good about the field that has been given to the community, but I get out of my car every day and I look at that field [at the school], and it looks the same as it did four years ago," said the principal, Rhonda Richetta. "I feel I have let the kids down."

The space behind the school is large enough to hold everything the students in 2007 imagined as well as a track for running, according to Larry Schugam, the executive vice president and chief development officer for the Baltimore Curriculum Project, which operates City Springs as a charter school.

Schugam developed a master plan for the area several years ago, and he said he and Richetta are hoping to reconvene the committee that worked on the football field to build a sports complex behind City Springs. Schugam said they hope to raise more money — he estimates the cost at between $500,000 and $800,000 — to provide good facilities.

The school could reach out to the community and local businesses, as well as the NFL Local Initiatives Support Coalition Grassroots Program, which provided funding for the first field. Schugam said the new field would be 80 yards long rather than 100 yards, but still provide plenty of space for elementary and middle-school students.

City Springs students are particularly interested in sports, Richetta said, and at times she has considered whether the school should have a particular focus on athletics.

"There is a lot of talent at City Springs, and we are not tapping into it. It is tragic," she said.

Right now the school, with about 600 students, can devote little time to athletics. Every student takes physical education for one 45-minute period a week. In addition, students can go outside once a week during lunch to play on the blacktop. Richetta said the grassy field with a few trees behind the school is off-limits to her students because it is scattered with broken glass, trash and needles discarded by drug users. Only on the days that she goes out with her gloves to clean up the area can her students play there.

If the students' dream is realized, Schugam said, the area will be fenced. Parents and other residents are interested in the project, and he said the school would have no trouble finding responsible adults in the neighborhood who would be willing to open the area for the community. But first, there's a lot of money to raise.

Copyright © 2012, The Baltimore Sun
Posted by Baltimore Curriculum Project at 5:49 AM