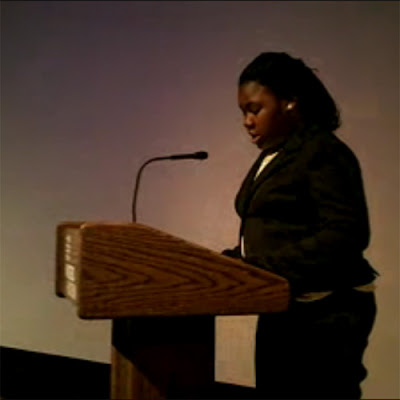 City Springs School has swept the Martin Luther King Jr. Day Writing Competition for the second year in a row. The competition is hosted by the Baltimore Urban Debate League (BUDL) and The Walters Art Museum.

The students composed essays about unsung heroes of the civil rights movement; what Dr. Martin Luther King meant to them; and how they want to continue his legacy today.

Read the winning essays at:
http://www.baltimorecp.org/docs/MLK12essaywinners.pdf

View of video of Shardai Little reading her essay on the BUDL Facebook page: http://www.facebook.com/bmoredebate

About BUDL
The Baltimore Urban Debate League (BUDL) enriches the academic experience of students from Baltimore City's public elementary, middle and high schools through participation in team policy debate. Through debate, students become engaged learners, critical thinkers and citizens and leaders who are effective advocates for themselves and their communities.
http://budl.org/

About The Walters Art Museum
The Walters Art Museum in Baltimore, Maryland is internationally renowned for its collection of art, which was amassed substantially by two men, William and Henry Walters, and eventually bequeathed to the City of Baltimore. The collection presents an overview of world art from pre-dynastic Egypt to 20th-century Europe, and counts among its many treasures Greek sculpture and Roman sarcophagi; medieval ivories and Old Master paintings; Art Deco jewelry and 19th-century European and American masterpieces.
http://thewalters.org
Posted by Baltimore Curriculum Project at 2:35 PM