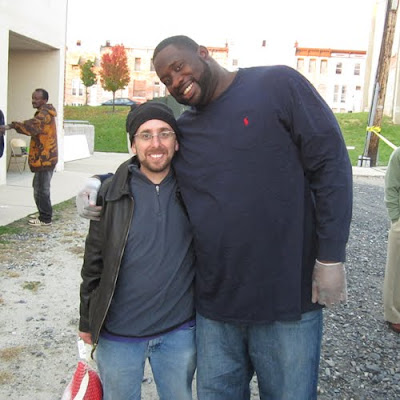 In addition to Mr. Gurode, several other Ravens players including Ray Lewis, Jameel McClain, Ray Rice, Ben Grubbs, Lardarius Webb, and Ed Reed were in the community last week to extend a helping hand in Maryland’s fight against hunger.

There are 466,000 people in the state who are food insecure, meaning they are unsure of where their next meal is coming from. Each year, the Ravens organization and its players commit to making a difference by feeding Maryland families.

We would like to thank Mr. Gurode for his generosity. Thank you also to the Baltimore Ravens and Melanie LeGrande (Executive Director, RACTF/Director of Community Relations) for always supportng BCP's neighborhood charter schools and school communities.
Posted by Baltimore Curriculum Project at 8:24 AM