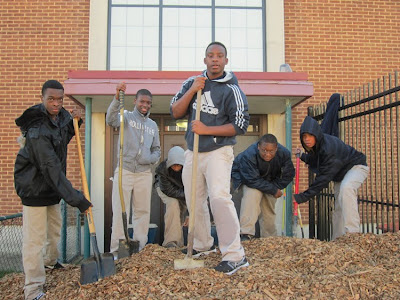 Recently we noticed that the mulch at Collington Square School's Ravens Playground was getting a little low. I emailed Blaine Lipski (Baltimore City Public Schools Executive Director of Facilities) to see if he had any mulch and before you can say "exemplary North Avenue employee" Mr. Lipski had a truckload of free mulch scheduled to be delivered on Friday November 18th.

When the truck arrived Friday morning we had plenty of manpower, but were short a few wheelbarrows. Civic Works, Baltimore’s urban service corps and an AmeriCorps program, saved us with a last minute loan of three wheelbarrows and a dozen shovels.

Then the hard work began... About 10 Collington 8th graders worked tirelessly for hours to move a four foot high pile of mulch from the sidewalk to the playground. Spirits were high as we shoveled the mulch, pushed wheelbarrows up the hill, and spread the mulch over the playground. Principal Etta Johnson pitched in with the shoveling and rewarded the students with a pizza lunch.

History of the Ravens Playground

View a video of Build Day at: http://www.youtube.com/watch?v=gU-A62riG3g


About our Partners
Baltimore City Public Schools' mission is to accelerate student progress through effective implementation of the Master Plan, focusing on quality instruction, managing systems efficiently, and sustaining a culture of excellence.

The Baltimore Ravens have a strong commitment to the community. In addition to appearances by Ravens players, coaches and staff, the team assists hundreds of charities and non-profit organizations through in-kind donations of team memorabilia.

The Baltimore Ravens All Community Team Foundation serves as a separate non-profit entity of the team's community outreach efforts. In addition to Ravens appearances and in-kind donations, the foundation provides support to Baltimore area non-profit organizations. Ravens players are also active in the community through individual foundations of their own.

KaBOOM! is a national non-profit dedicated to saving play for America's children. Our mission is to create great playspaces through the participation and leadership of communities. Ultimately, we envision a place to play within walking distance of every child in America.
Posted by Baltimore Curriculum Project at 8:53 AM