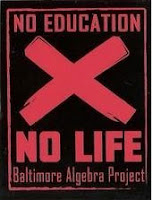 City Springs School hosted a Town Hall meeting on Baltimore's youth on February 17, 2010. Below is the article by Lynn Pinder from the Baltimore Examiner:

February 17th will go down in Baltimore history as a day when community leaders, police officials, public policy makers, educators, youth and parents wade through the snow and ice to come together for a town hall meeting sponsored by the Eric R. Villines Advocacy Institute (ERVAI) and the Baltimore Algebra Project (BAP). The ERVAI/BAP Town Hall Meeting will take place at the City Springs School located 100 S. Caroline Street from 6 p.m. - 8 p.m.

Some of the issues up for discussion at the town hall meeting include: (1) the number of youth transferred or waived into the adult criminal justice system; (2) the construction of two new $280 million detention centers in Baltimore City for women and juveniles; (3) the school to prison pipeline; (4) youth unemployment; (5) the Student's Bill of Rights; and (6) youth violence. Organizers of the town hall meeting invite anyone, who has an interest in taking action and doing something to change the current culture of local policy-makers to fund jails instead of education and workforce development opportunities, to attend.

"I hope that some people will get educated and angry enough to do something. We are in a state of urgency. Our law-makers are authorizing the release of funds to build $280 million jails and cutting funds toward education. My advice for people who just want to attend an event to talk and hear a good speech is to stay home. This town hall meeting on 2/17 is the start of a movement in Baltimore - only those with the tenacity, spirit and commitment to positive youth development and change should come out and let their voices be heard," said Kimberly Armstrong, the Founder of the Eric R. Villines Advocacy Institute and one of the organizers of the town hall meeting.

Posted by Baltimore Curriculum Project at 8:21 AM