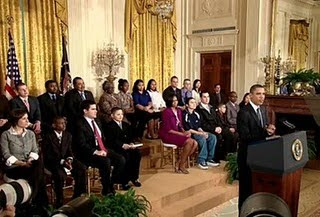 On January 20th Ta'Shawn Miles, a 6th grader at BCP's Collington Square School of the Arts, had the experience of a life time. He visited the White House and met the President and First lady as part of a National Mentoring Month celebration.

Ta'Shawn participates in the Higher Achievement Program at Collington Square School, which provides mentoring in addition to an after-school academy, summer academy, and a high-school placement program for middle school children.

Sarah Pitcock, Director of Program Quality for the National Summer Learning Association, is Ta'Shawn's mentor. Below is a post from Ms. Pitcock about Ta'Shawn from the Higher Achivement Program Blog (higherachievementlearning.blogspot.com):

Memoirs of a Mentor - Shared by Sarah Pitcock, of Higher Achievement Baltimore

I have mentioned a few times my love for mentoring at Higher Achievement and for my mentees. They have really brought so much joy into my life in such a short time. I am very blessed to spend time each week with Ta’Shawn Miles, a sixth grader at Collington Square with hopes and dreams that far exceed the small radius of East Baltimore he knows.

Since the first day I met him, Ta’Shawn has been talking about President Barack Obama (he always calls him by his full title). Seeing an African American man become President has truly changed Ta’Shawn’s concept of what he can do with his life. He talks about him ALL the time!

When I went to mentoring on Tuesday, the Center Director told me that Ta’Shawn’s mom had picked him up early that day to go buy him a suit because he was going to the White House to represent Higher Achievement and United Way for a National Mentoring Month event the next day. I nearly fell over, and I’ve had chills ever since just thinking about what the experience would be like for him.

I wasn’t sure if the President would actually be there or if Ta’Shawn would have any contact with him, but I got the full update this morning and the picture above says it all. Ta’Shawn is front row, second from left.

I am just bursting with pride today and wanted to share. Here is Ta’Shawn’s official quote about the experience, for historical record: “It was so exciting. I never thought a day in my life I’d get to meet the first Black President of the United States. It was an honor for me to walk into the White House, because so many people will never have that experience.”

We would like to congratulate Ta' Shawn on this honor and thank Ms. Pitcock, Collington Square Principal D'Andrea Chapman, Higher Achievement Program, and EBDI for making opportunities like this possible for our kids.

View the video of the President’s speech here.
Posted by Baltimore Curriculum Project at 6:51 AM