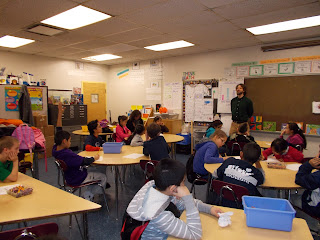 By Lucia Given and Edwin Rivera

You will never guess how many famous people David Dudley has met! In December, David Dudley, features editor of AARP magazine came to speak to 4th and 5th grade students. He visited the Wolfe Street Academy after school program. Mr. Dudley came to give a speech to the classes, but kids asked him a lot of questions. They asked so many questions that he spent most of his time answering them. The classes learned a lot about Mr. Dudley, and his job as an editor and writer.

David Dudley is 44 years old. He was born in Los Angeles, California and grew up in New York. Now he lives in Baltimore with his wife and his daughter. He used to write for a newspaper but now he is an editor for AARP magazine. He has to spend a lot of time checking what other people write to make sure it is good. He wanted to be an author but he started writing for newspapers and magazines because he thought he wouldn’t make enough money writing books. Mr. Dudley loves to read. His favorite book is Moby Dick, a story about a whale. Mr. Dudley thinks he has met about 75 famous people. He writes stories about them sometimes for a magazine. He met Jane Goodall, the famous animal scientist. He said she is very nice. He has met Johnny Cash. He is a famous country singer. He has not met the Bee Gees.

Mr. Dudley told us that he has fun writing and feels proud. When we asked him if he loves his job, he said yes. It is a lot of hard work writing and sometimes fun to do. The students thought “it was cool” to get to meet him and ask questions. Maybe someday one of the students might want to be an author.
Posted by Baltimore Curriculum Project at 11:21 AM