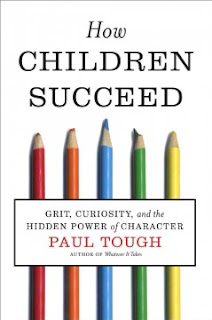 In his recent book “How Children Succeed”, journalist Paul Tough challenges what he call the “cognitive hypothesis”, the theory that what enhances the chances of lifetime success for our children is the development of the realm of cognitive skills, those related to traditional notions of intelligence and education.  More likely, argues Tough, is that we develop character traits such as “grit”, determination and optimism, abilities that help us overcome the challenges of life and what our status is socially and economically.

It’s a persuasive thesis. It helps do several things for us all at once: it can persuade us that we have the individual tools to overcome poverty and deprivation; it can help us formulate arguments against the frenzy of high stakes testing; it can promote useful ways to enhance the school curriculum. It can certainly increase our optimism about education being the key component to combat social and economic ills. It also conveniently fits into our national propensity to think in black and white dichotomies!

Paul Tough is not arguing in either/or ways but those who are interpreting his arguments tend now to pose “character education” against “academic” skill building, as if these two were mutually exclusive.  It’s tempting to see things this way: it is much less complicated, and pushing the character agenda helps to solidify the thesis that if we fail, it’s our own fault! In reality, success in our society, whether social or economic, is most often a combination of factors.

Tough argues that “parenting matters” regardless of income levels, and that’s clearly true. Our society is full of examples of the children of wealthy parents being feckless, weak, arrogant and failures. We can also provide the exemplars of success that came from the most distressing backgrounds, full of poverty and deprivation.  Indeed, we love to raise those examples high, since it helps us cement the grip that “American dreaming” has on our collective consciousness and the stories we tell ourselves about our country.

Tough’s theory about character traits being significant is not all that new.  Private schools around the country have been selling the “character counts” model for decades, especially for those students who have trouble raising their grades to Ivy League standards. The importance of “grit”, (which is rather ill-defined by Paul Tough, but really means stamina and determination) and other elements of character are hard to challenge.

However, the most convincing combination would be the confluence of character and intellect.  Tough agrees.  The danger, however, in the “character counts” perspective is that it helps us avoid the need to look for collective solutions to the nation’s ills. It also, according to Mike Rose in a persuasive essay he wrote for Education Week (January 16, 2013), renders the cognitive realm simplistically represented by scores on tests.

“We have a powerful tendency to binary, either –or policies” says Rose, and he thinks the recent “swing” toward character education is likely to fail.  “But over the past 50 years, attempts at character education as a distinct pursuit have not been particularly successful.”

Instead, argues Rose, “let us take a hard look at our national obsession with tests and scores and grades and let us think more generously about what kinds of people we want our schools to develop.  Part of such reconsideration would include a reclaiming of the full meaning of cognition-one that is robust and intellectual, intimately connected to character and social development and directed toward the creation of a better world.”

The argument, if there is one, between “cognitive” and “character” is just one more in a set of educational false dichotomies.  A genuine education would embrace both aspects, what we have traditionally called the “hearts and minds” of our children. If we could see the issues in this frame, perhaps we would expand out curriculum, revive the fading disciplines of science, art, history, philosophy and geography, and, at the same time, encourage our children to understand that the content of their character is a determining factor in how they experience and shape the world.
Posted by Baltimore Curriculum Project at 6:21 PM