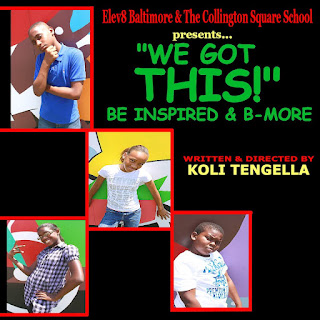 On October 2, 2012 local filmmaker, actor, and Collington Square School of the Arts theater arts instructor Koli Tengella appeared on the Marc Steiner Show to talk about his latest film about bullying called We Got This: Be Inspired and B-More.

Koli was joined by Dr. Muriel Berkeley, Founder and former President of the Baltimore Curriculum Project; Ms. Sabriyah Hassen, Site Manager for Elev8 Baltimore at the Collington Square School of the Arts; and some of his students.

The film will be screened on Sunday, October 7, at The Central Branch of the Enoch Pratt Free Library.

Listen to the segment atL
http://www.steinershow.org/radio/the-marc-steiner-show/october-2-2012-segment-3-0
Posted by Baltimore Curriculum Project at 5:35 PM