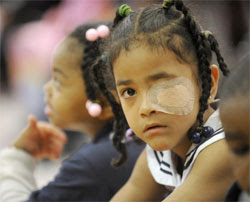 Dozens of parents filed through City Springs Elementary/Middle School on Friday morning to sign a petition to protest proposed funding cuts to the school's health center, a resource they say is vital to their children's well-being.

The charter school, which serves students in pre-kindergarten through eighth grade, is one of six that might have their school-based health centers cut next year to help close a $121 million deficit in the Baltimore budget.

"This is going to be devastating," said Sharone Henderson, president of the Parent-Teacher Organization at City Springs. "We're trying to teach our children, get them to school — we can't be the doctors and nurses in the school, too."

Several parents echoed Henderson's concern, offering examples of how important the health services are to their children.

"My granddaughter had eczema so bad, her skin looked like it was burnt — she needed cream every three hours," said Deloris Edwards. "How else would she get that?"

"The nurses are the first responders," said parent Chevella King. "If one our kids have a bad asthma attack, they'll be laying on the ground waiting for an ambulance … and they're usually late."

Henderson drew up the petition Thursday — which had about 150 signatures by Friday morning — after receiving word from City Springs Principal Rhonda Richetta that the school's 14-year-old health center was among those targeted for closure under Mayor Stephanie C. Rawlings-Blake's proposed budget.The mayor's original budget included funding cuts to 11 of the 13 health centers. But in a revised budget presented by Rawlings-Blake on Monday, seven of the centers would be funded if the City Council approves a series of taxes and fees.

The city Health Department said it does not have a final list of which school health centers are slated for closure. "The city budget process is far from complete. Final decisions on changes at individual schools have not been made," said Brian Schleter, the Health Department's spokesman.

In addition to the health centers, the city also proposed cutting its support for crossing guards and eliminating its funding of free bus passes for students. School officials said they would look to shift funds in the school system's recently adopted $1.23 billion budget to make up for some of the city's cuts.

However, the city did maintain its state-required support of nearly $200 million to schools this year.

"What we're seeing here is a reasonable approach where we're fully funding our obligation, but trying to work with the schools on cost-sharing," the mayor's spokesman, Ryan O'Doherty, said of the cuts.

School-based health centers are run by the city's Health Department and are staffed by certified nurse practitioners who offer treatment above and beyond what parents called "pop a pill and take a nap" services found in basic health suites, which are usually staffed by nursing assistants.

More than 90 percent of City Springs students are registered in the health center to receive care that includes daily breathing treatments for asthma, immunizations and prescriptions. About 100 students are on the school's "medical alert list," for potentially life-threatening illnesses. Parents also expressed concern that fewer health services would drag down the school's 95 percent attendance rate.

Parents at other schools are also in the process of organizing.

"Quite a few of our parents committed to doing whatever it [takes], but certainly some letter writing and a petition," said Matthew Wernsdorfer, principal of Civitas Middle/High School.
Wernsdorfer criticized the criteria used to determine the proposed closures, such as enrollment numbers. The Health Department used data from the past three years, and Civitas has only been open for two, he said.

"It's not a very proactive set of criteria of where the money's going to go," Wernsdorfer said.

But parents at City Springs said they would be proactive, as many walked out of the school with stacks of handouts displaying the names, photographs and phone numbers of all City Council members. Henderson said she and other parents, bedecked in their school colors, plan to testify at a May public hearing on the city budget.

"We are speaking for all the centers who are going to be closed," Henderson said. "This is for all of our kids."