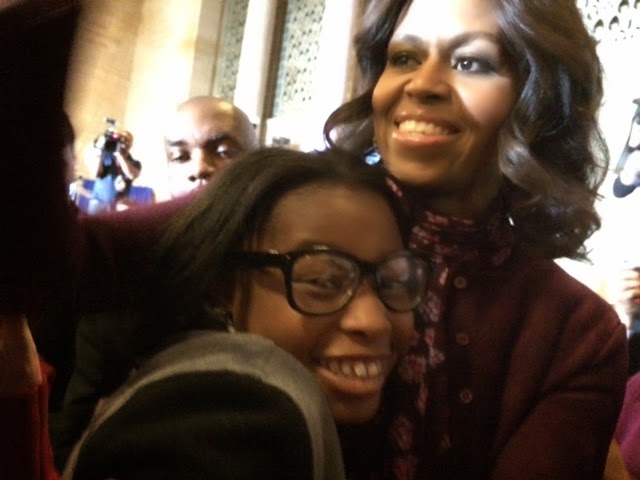 
Chelsea and I had an amazing time! Chelsea had an experience that she will not only remember for the rest of her life, but one that inspired her in a HUGE way. She heard very moving speeches from not only Michelle Obama, but from a very long list of local politicians.

We were standing right up front, and when Michelle Obama started moving through the crowd, she reached out to shake my hand and I asked her to talk to Chelsea.

She grabbed Chelsea's face in her hands and said "everything we do is for you."

I selected Chelsea to attend because she is interested in public speaking (she is one of our top debaters) and wants to be a lawyer and a State's Attorney when she grows up.

As we were walking back to school, Chelsea looked up to the sky and said, "that was great! I am so inspired!"  I think it was about equal to how much I was inspired at that moment by Chelsea.  She was right, it was great!

I want to thank City Springs teachers Patrick Cero and Zachary Carey for having a conversation with Chelsea about what it means to be a republican vs. a democrat.  She listened intently to every person's speech and identified the key things they said that were characteristic of a democrat.

It was awesome for me to witness her applying the learning she had just experienced from a conversation with two teachers.  Kudos, Mr. Cero and Mr. Carey!

We would like to thank Brooke Lierman for providing tickets to the rally.

Posted by Baltimore Curriculum Project at 11:07 AM