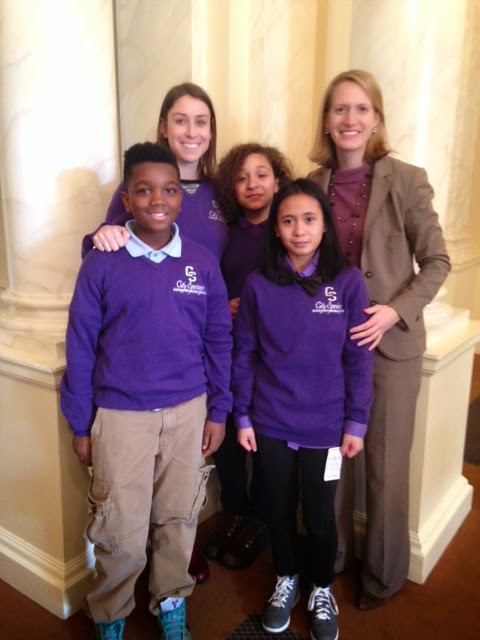 Last week three City Springs EMS students traveled to Annapolis on two consecutive days to testify before the Education and Economic Development Subcommittee of the Maryland House Appropriations Committee and the Senate Education, Health and Environmental Affairs Committee on behalf of the Reginald F. Lewis Museum. They also visited with State Delegate Brooke Lierman in her office.

Last year these students participated in the For Whom It Stands (http://rflewismuseum.org/FWIS) exhibit at the Reginald F. Lewis Museum, which is seeking continued State funding. The students' testimony is below.

City Springs and BCP would like to thank the Reginald F. Lewis Museum and Delegate Lierman for all they do for our students. Special thanks to Ms. Trudgeon for working with these students to prepare their testimony and traveling with them on both days to Annapolis.

I am currently a fifth grader at City Springs Elementary School and attend with my brother, who is in first grade. Last year my brother and I were given the opportunity to be a part of a photography project for the Reginald F. Lewis Museum, which is just a few blocks from my school. I was really excited when I arrived and was given a tour of the museum-- and I was astonished that something like the museum was in my community, since it was the first time I had ever been there. It was cool to see things that are a part of my culture, and it was even cooler to be a part of an exhibit at this museum. It made me realize that I am a part of black history.

I am a sixth grade student at CS E/M school. In the spring of 2014, I was given the privilege to be a part of For Whom It Stands... That exhibit was funded by the Reginald F Lewis Museum of Maryland African American History and Culture. For Whom It Stands prompted Americans to interact with the flag and portray how they felt about it. I stood with the folded flag in front of me, which symbolizes the freedom and the privilege to do things that others in different countries do not. I was proud to hold the American flag, and I am proud of what it stands for.

I am an 8th grader attending CS E/M school. I'm here on behalf of my school and the Reginald F. Lewis Museum, to tell you about my experience and how the museum has become a real treasure in our school community. It started with the "For Whom It Stands" exhibition. I, along with ... several other students, was fortunate enough to participate in this project and have my photograph installed on the outside of our school building. The mural is publicly shown to people passing by. At every glance, it gives us different perspectives and meanings. When I think back to the creation of the mural, I remember being called up for the photoshoot and the photographer, Sheila Pree Bright, asking me a question that I had never before thought deeply about: "What does the American flag mean to you?" Many of us were left dumbfounded, but the photoshoot gave us the opportunity to really think of what the flag stands for. Maybe it means more than just red, white, and blue. As a young Asian-American, it was difficult for me to portray the meaning of the flag in my photograph because being an American isn't my sole identity, or my original identity. Crawling out beneath the flag's folds helped me explore and embrace this complex idea. Grasping for meaning in the flag, the other students and I began to truly value our history. The Reginald F. Lewis Museum provided this opportunity— and has challenged my community to also explore, embrace, and value their heritage as well. 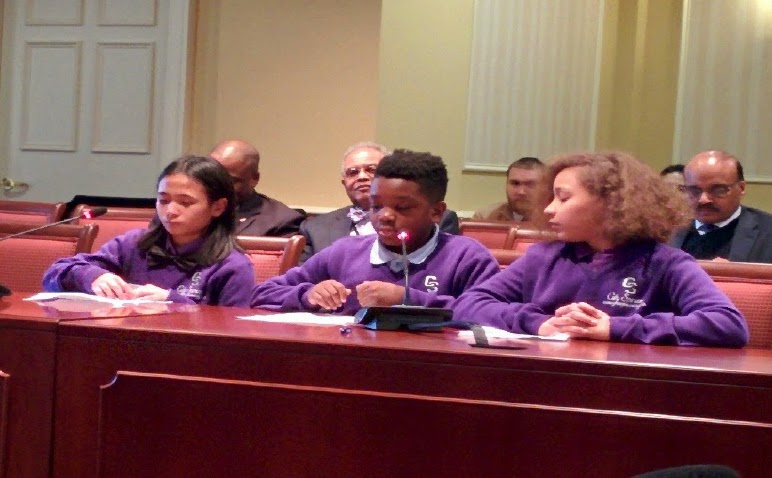