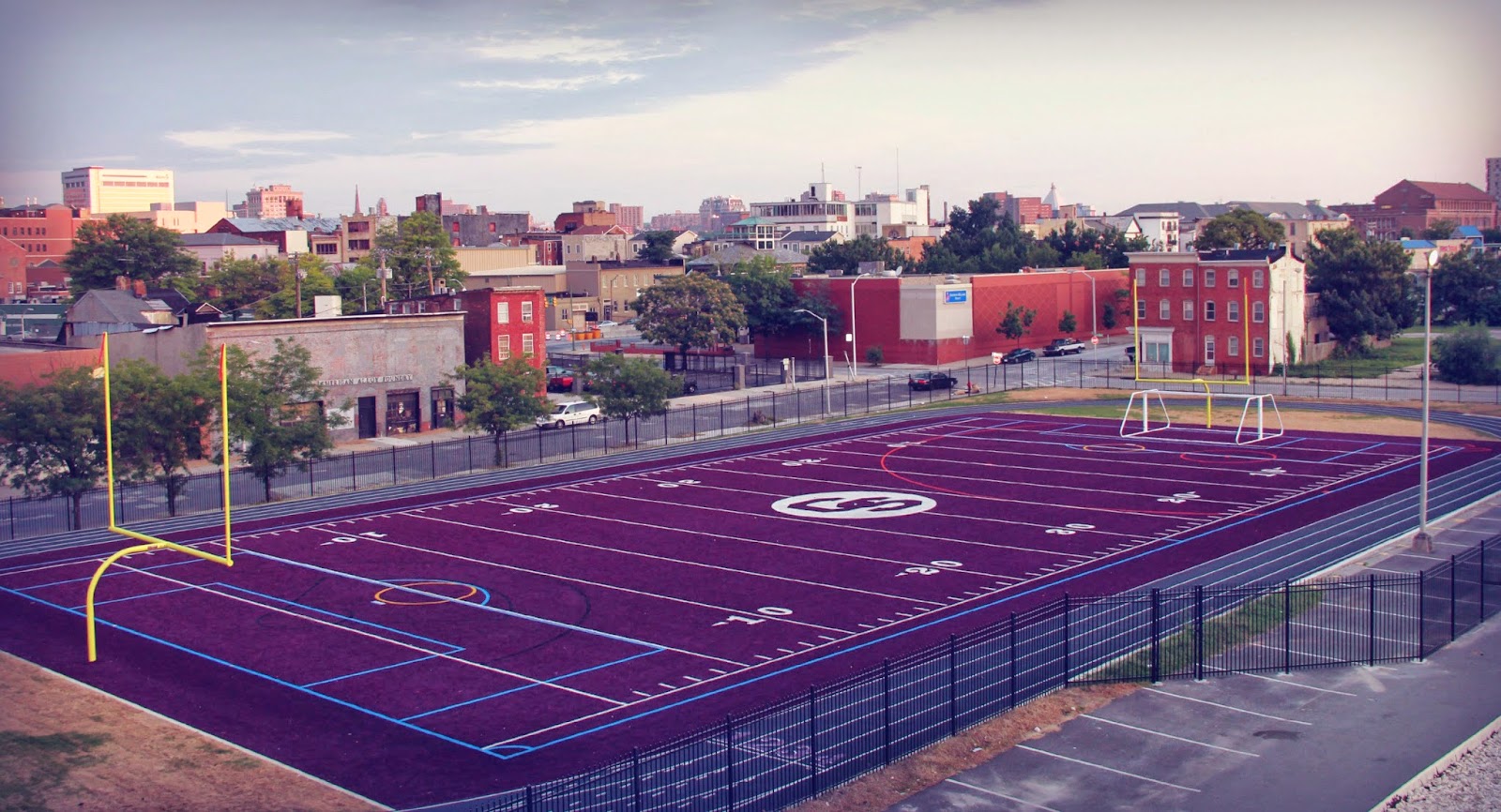 A dream that has been seven years in-the-making will be fulfilled this fall with the grand opening of the City Spring Community Athletic Complex.

The dream began in 2007 when a group of City Springs students presented Principal Rhonda Richetta with a petition at the school’s daily morning assembly. The petition urged her to repair the run-down field, playground and basketball courts adjacent to the school.

The complex outside has many things wrong with it. It is outlined with a very uneven grass, it has broken glass on the rocky concrete, a broken gate, a swing set without swings, a basketball court with only one goal and it is very trashy.

This needs to be fixed because many children hurt themselves on the complex...we can have a football field, basketball court, a swing set and a gate to keep intruders out and to keep our fellow peers safe. This will benefit our school because our children will be more safe and will be able to stay healthy.

The team met regularly to flesh out the vision for a sports complex, discuss logistics, and develop a fundraising plan. BCP secured Community Investment Tax Credits and in October 2008 the Little Italy Bocce Rollers Association hosted a Bocce Tournament to raise funds for the project.

After determining that the sports complex could not easily accommodate a regulation-size football field, the team developed a master plan to build a regulation-size field in nearby City Springs Park and a “feeder” field for elementary-age football in the original location; complete with a track, basketball courts, and playground.

“After picking up the schematics for City Springs Park from the City Planning Department and determining that a regulation-size field would fit; I developed an albeit amateur design for a football field in City Springs Park,” said Larry Schugam.

Living Classrooms
With this design in hand, Living Classrooms took the lead to meet with Recreation and Parks and apply for a LISC grant to develop the regulation-size field in City Springs Park. The rest is history.

“We are incredibly grateful to Living Classrooms, the Ravens, Rec and Parks, and LISC for developing this beautiful field just a block from our school,” said Rhonda Richetta.

“It is amazing what can happen when schools like City Springs and nonprofits like the Baltimore Curriculum Project and Living Classrooms work together.”

Phase Two
After City Springs Field opened in 2011, the school and BCP turned their attention to developing the dilapidated park next to the school.

“We hope that this investment in City Springs Park and the attention it has drawn to this part of East Baltimore will spark greater interest among local businesses and foundations in developing our original vision for the City Spring Sports Complex,” said Muriel Berkeley in 2011.

In the park next to City Springs School the swing set still had no swings; the basketball courts still had only one basket; and the concrete was still broken. As Principal Richetta gazed at the park, all she saw was potential.

“With wonderful partners like Living Classrooms and the Ravens, no dream is beyond our reach.”

A Stroke of Luck/Fate?
On December 28, 2011 Larry Schugam sent out a press release describing the unfulfilled vision of a City Springs Community Athletic Complex.

It was a slow news day and Liz Bowie at The Baltimore Sun picked up the story. She interviewed Schugam and Principal Richetta and published an article that set off a miraculous chain of events.

A week after the Sun published the story, Maryland State Senator Nathaniel McFadden called Principal Richetta and told her that he had a $50,000 donation for the athletic complex from an anonymous donor. He just needed to know who to make the check out to.

“Before she passed in 2009, she told me to take care of City Springs School. When I read Liz Bowie’s article about City Springs in The Sun a few weeks ago, her words came back to me.”

Ms. Pope worked for Baltimore City Public Schools for 36 years - 34 as a parent liaison. She was one of six parents who found the money and lobbied to build City Springs EMS. Her many accomplishments included helping 44 people move out of Perkins Homes Public Housing and into their own homes; working with residents to found a food co-op; and running a weekly peer mediation group for City Springs students.

City Schools Supports Project
Inspired by the unexpected donation, Principal Richetta and BCP redoubled their efforts to make the athletic complex a reality.

At the January 2012 Baltimore City School Board meeting Principal Richetta, BCP Founder Muriel Berkeley, and BCP Director of Academic Affairs Jon McGill announced the news of the $50,000 donation and the plans to build the athletic complex.

Former CEO Andres Alonso responded that the school and BCP should not have to complete the project by themselves and committed support from City Schools.

Blaine Lipski spearheaded the efforts around design and construction.

“Our collective efforts have brought a much needed resource to the City Springs community, which will promote better health and increase the sense of community for surrounding residents,” said BCP President Laura Doherty.

The video, which was produced by Principal Richetta, Andrew DeVos, and Sonya Hughes, can be viewed at
http://bitly.com/csathleticsvideo1

Legg Mason has been a faithful partner with BCP for over eight years. Last school year they provided a $30,000 grant for the BCP schools and sponsored student trips to the BSO, the Hippodrome, and Junior Achievement’s BizTown.

The Baltimore Ravens supported the grant from the NFL Foundation Grassroots Program, a partnership between the National Football League Foundation, which provides funding for the Program, and LISC, which provides technical assistance and manages the Program.
Special thanks to Ray Herman, Development Research Associate at Johns Hopkins University, for volunteering to help write the NFL grant application.

The Day is Almost Here!
The grand opening of the City Springs Athletic Complex will take place on September 15th at 11:00am. Special guests will include Ravens President Dick Cass, Poe, and a variety of local officials.

A dream fulfilled...
I cannot stop smiling when I look at our beautiful athletic complex, especially when it has kids playing on it,” said Principal Richetta.

“It is worth far more than every minute of time and every dollar that was spent to make it happen.  Our kids are ecstatic!  They deserve a place like this.  The purple turf exemplifies their specialness, and for the City Springs’ community, purple is not a color it’s an attitude.  As of late, my attitude is one of extreme gratitude for all the people who came together to make this dream a reality.  I hope those who contributed in any way are aware of how much joy they have brought to a community, and the difference it will make in so many lives.”
Posted by Baltimore Curriculum Project at 6:23 AM