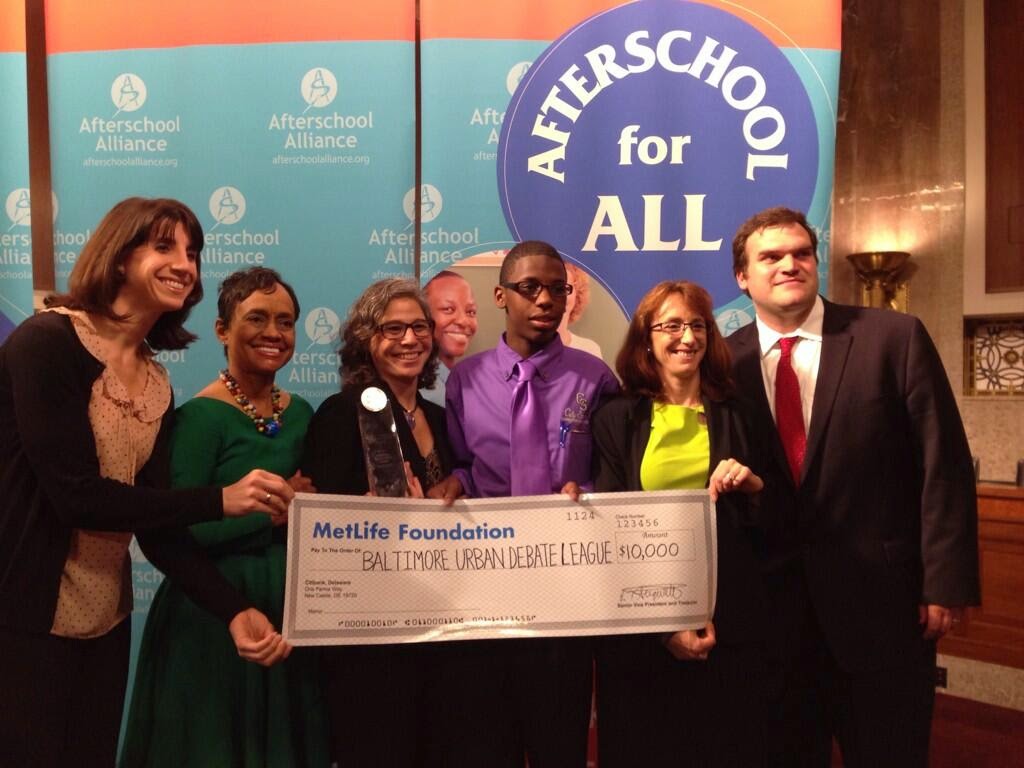 On May 22, 2014 the Afterschool Alliance honored the Baltimore Urban Debate League (BUDL) with the 2014 MetLife Foundation Afterschool Innovator Award.

Darren has participated in BUDL for four years. Megan Miskowski and Gerald Loiacono coach the City Springs Debate Team and in May Megan was named BUDL Coach of the Year.

Only five afterschool programs in the country were recognized for using innovative approaches to help middle school students succeed in the programs, school and life. The Afterschool Innovator Award includes $10,000 for BUDL to expand its work.

Over the last 15 years the Baltimore Urban Debate League has served thousands of Baltimore City students and trained and engaged hundreds of teachers. This year alone BUDL served over 500 students across 30 elementary, middle and high schools.

The program helps students learn to present an argument using evidence, evaluate the merit and credibility of evidence, respond clearly to questions raised about that argument, and listen to and learn from others.

BUDL's newest partnership supports BCPS schools and teachers in their common core aligned "It's Debatable" program, which provides professional development to teachers in schools across the City to learn to use debate and argumentation based teaching strategies in classrooms in every discipline.

The “Breakfast of Champions” is part of the 13th annual Afterschool for All Challenge, sponsored  by the Afterschool Alliance, which brings together hundreds of educators, parents, afterschool leaders and advocates from around the country for a series of events and meetings with Members of Congress.

Following the "Breakfast", Darren and other participants from 46 states met with senators and representatives, including Senator Ben Cardin, to talk about the many ways afterschool programs support children, families, school and communities, and to urge them to support the Afterschool for America's Children Act.

We would like to thank BUDL for supporting our students and the Afterschool Alliance for recognizing BUDL's oustanding work!