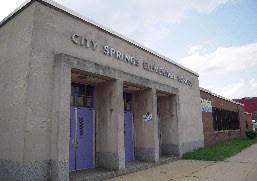 City Springs Principal Rhonda Richetta talks about the proposed cuts to the school's health center in the following article from the Baltimore Sun.

Principal Rhonda Richetta can vividly recall days when students have come to her office door at City Springs School gasping for air.

The school has a large population of asthmatic elementary- and middle-school-age students who receive critical services — including daily breathing treatments — from a nurse practitioner in its health center.

Richetta fears that could change next year if the school is one of six that are slated to reduce their health care services because of proposed funding cuts from the city.

"It's a vital resource, and I just can't imagine what it's going to be like if we have a school nurse whose hands are tied because they can't provide those services," Richetta said, adding that more than 100 students are on the school's "medical alert list" for potentially life-threatening illnesses. The center provides critical health care to about 36 students a day, she said.

The school-based health centers, run by the Baltimore City Health Department, are usually staffed with a full-time nurse practitioner who is qualified to provide asthma treatments, immunizations, hearing and vision screenings, and mental health and substance abuse treatment.

If the health center ia downgraded, nurses could do little more than hand out medicine and make a phone call to the student's home, Richetta said.

"I don't want to have to stand there with a child gasping for air waiting for the ambulance," she said.

Health services are just one area where Baltimore schools will be affected by a dire city budget. While the school system gets most of its $1.23 billion budget from the state, more than $200 million is due to come from the city.

In the most recent budget proposal from Mayor Stephanie C. Rawlings-Blake, six of the 13 advanced health centers run in city schools would have to make do with basic services from a nursing assistant.

Additionally, the city has proposed cutting its contribution to crossing guards in half and eliminating funding for student bus passes.

That will force school officials to come up with $6.2 million to fund student transportation and a full force of crossing guards, and find ways to salvage some of the advanced services provided in health centers.

"We understand the dilemma that the city's in. … I think we're all in the same boat this year," said Michael Frist, chief financial officer for Baltimore schools.
Posted by Baltimore Curriculum Project at 7:14 AM