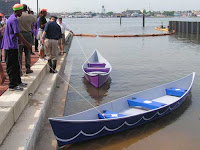 After being christened the canoes were placed in the harbor to prove their seaworthiness. Students, mentors, and teachers then paraded the canoes up South Caroline Street. An excited crowd at City Springs welcomed the cavalcade.
Since September 2007, City Springs School students and their Colliers Pinkard mentors have visited the Living Classrooms Foundation one day a month to build the peace canoes.
Gregory Pinkard, executive vice president of Colliers Pinkard, said that he wanted an effective way to build relationships with the children rather than just showing up at the school. "We have been mentoring students for 10 years,” said Mr. Pinkard, “and we are always trying to find unique ways to engage them.”

Nicole Keelty, vice president at Colliers Pinkard, developed this year’s mentoring program to build the canoes and produce a multimedia video. Living Classrooms provided space, materials and instructors for the project.
“In the past,” Keelty said, “we have collected winter gear, held a

spring picnic and a Christmas pageant for the children. The only thing missing was consistent interaction between the mentors and kids, creating something positive and learning to work as a team."

Rhonda Richetta, principal of City Springs, said that she hopes the students who didn't participate in the program this year will see the canoes and begin to think about participating in the future.
City Springs School and the Baltimore Curriculum Project would like to thank Colliers Pinkard, Living Classrooms Foundation, and all of the mentors for their support.
Posted by Baltimore Curriculum Project at 9:22 AM